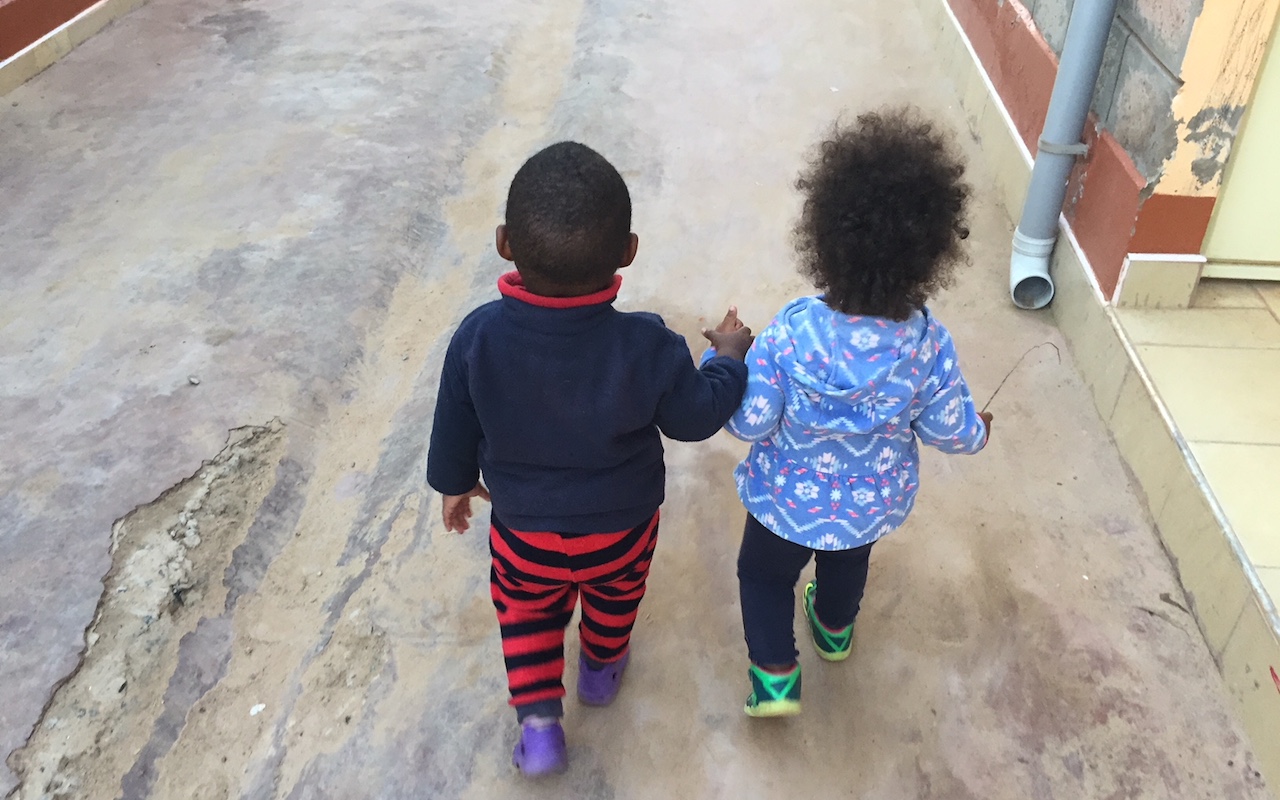 We arrived in Machakos, Kenya in August 2016 with too many heavy suitcases, some excitement tempered by bucket loads of anxiety. Nips was not yet one year old, and we were more than a little nervous about relocating to a place where we knew nobody and that we also knew almost nothing about. With an infant!

Our first task was to find a home. We were shown a handful of places: the first place we saw only had one tap in the whole apartment, and that one had somehow been built into a wall so that it didn’t actually turn on; another apartment was apparently ready for move-in, but to us it still looked much like a construction site with builders wandering around mixing cement.

We tried not to let our worry show too plainly. But no doubt our eyes were a little frantic. We had to find a place where we would feel comfortable, and where we’d know our little girl was safe and happy.

A new friend managed to find us a 2-bedroomed apartment in a small suburb outside Machakos. Down a dirt road, past some vegetable sellers, with cows and goats as some of our neighbours.

Yes, all the walls in the apartment were painted bright sunflower yellow. And yes, that bright paint was peeling off in numerous places. But it had running water, electricity, and working taps in both the bathroom and the kitchen. This was where we would set up our new home. 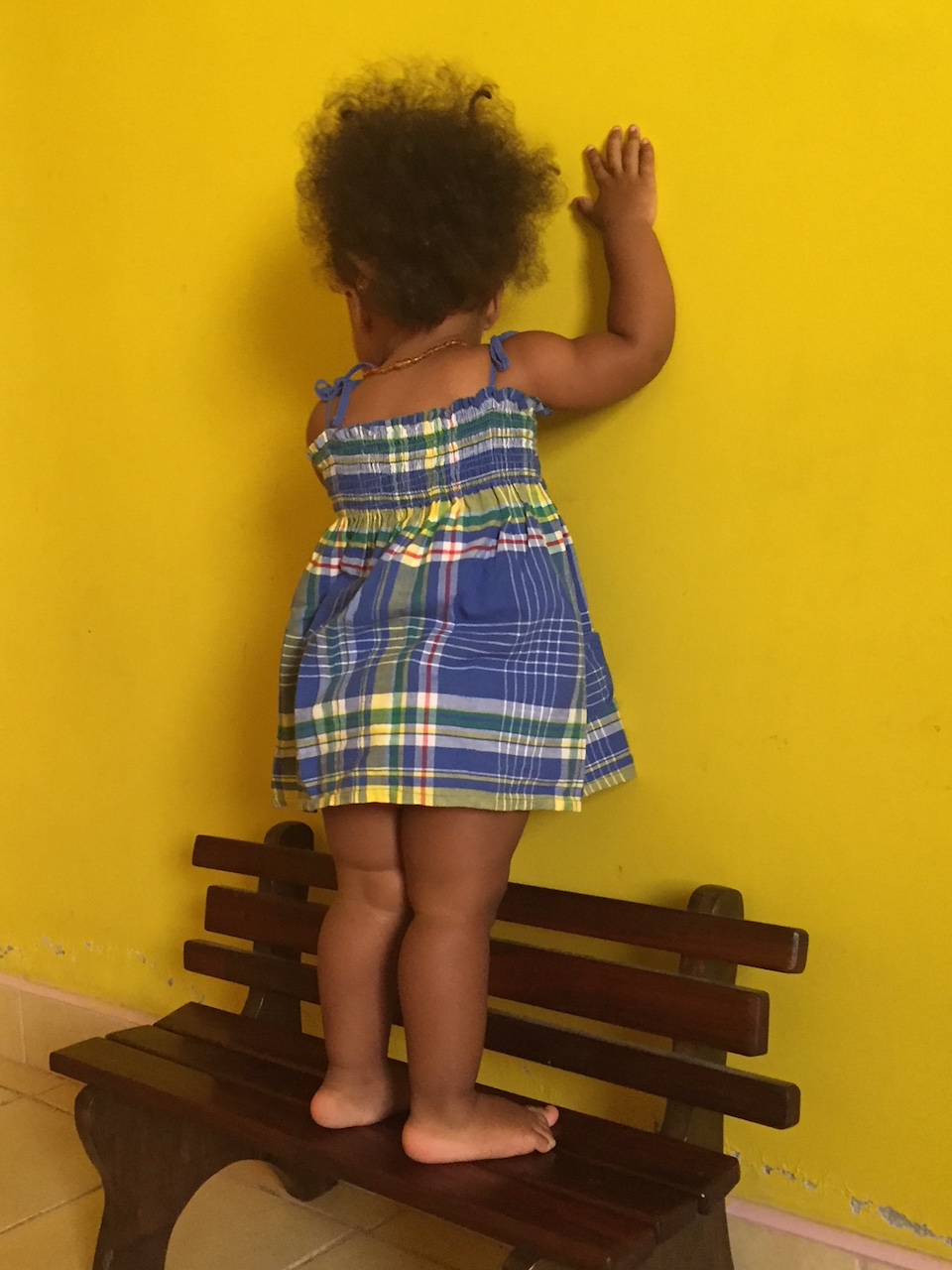 As a mum, my biggest concern about being in Kenya was always about Nips. How would she adapt to Kenya? Would she be safe? What would she eat? Would she make friends? How would we deal with the language barrier? Would it be a big deal to others that she was mixed race? Would we find good childcare? The list went on and on and on.

Little did we know that we were moving into a ready-made community, filled with little friends for Nips. Any worries I may have had about her social life and well-being were unfounded, and it’s been apparent from day one that Nips simply thrives in her current surroundings.

So here we were. We wanted to make the best of being in Machakos. After we’d settled in a bit, the next step was getting to know our neighbours. 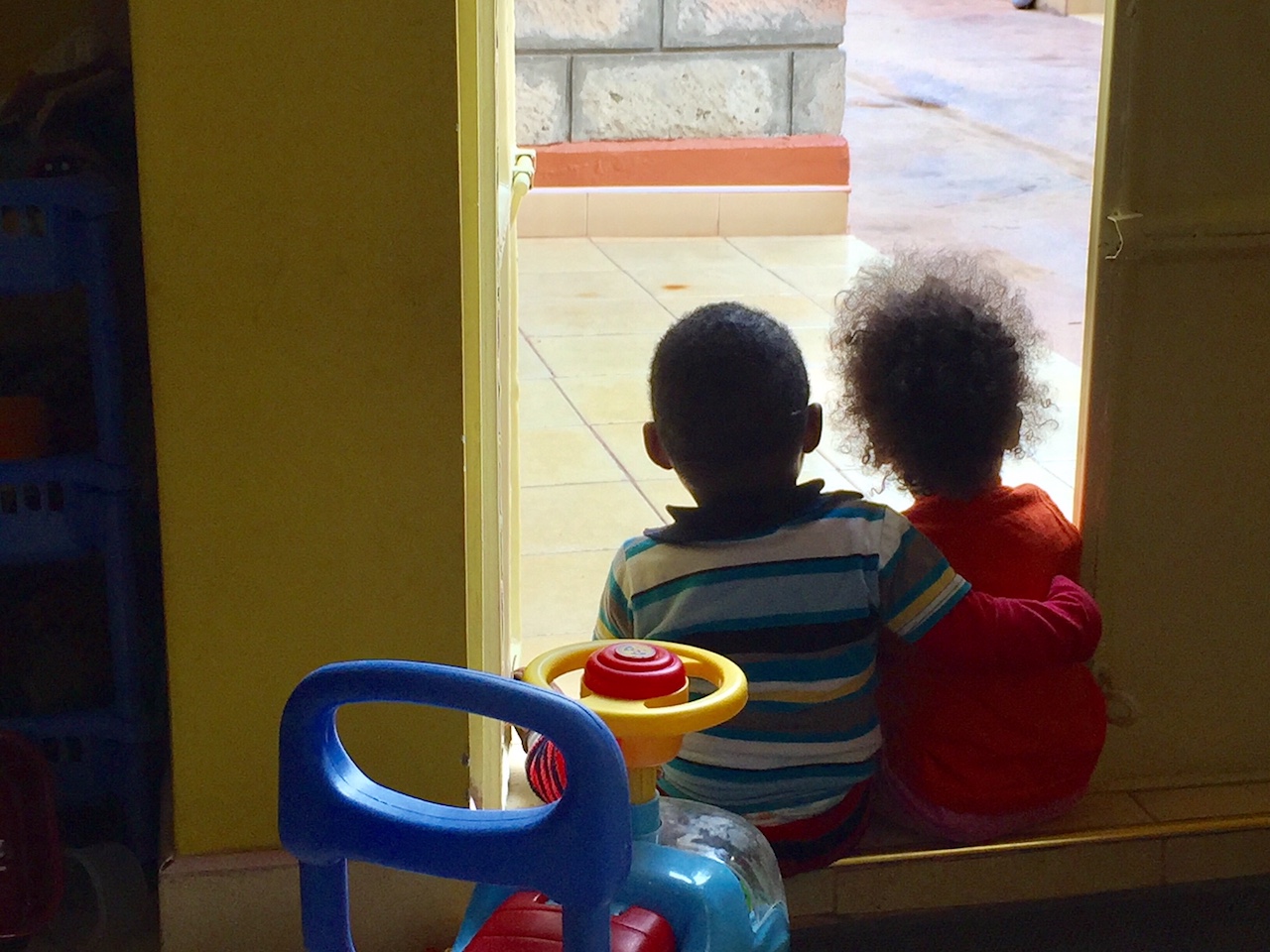 So Nips had three 1-3 year old buddies; all boys; all called “Wyan”; all living next door. It sure made it easy as she became verbal – she only had to learn one name for all her friends. It also made it easy when she’d toddle around outside shouting for “Wyan” – whichever one of them came toddling back, it was just fine.

Fungai and I, on the other hand, had to come up with ways to differentiate between the Wyans when we were discussing them. On the one side was “little Wyan,” due to his size. He later became “Toto Wyan.” (“toto” in kiSwahili means “child” and Nips apparently heard someone calling him “toto” so that name stuck).

The older Wyan became “big Wyan” – and he really is quite a lot bigger than the other Wyans. And therefore was much, much better at tricycling. 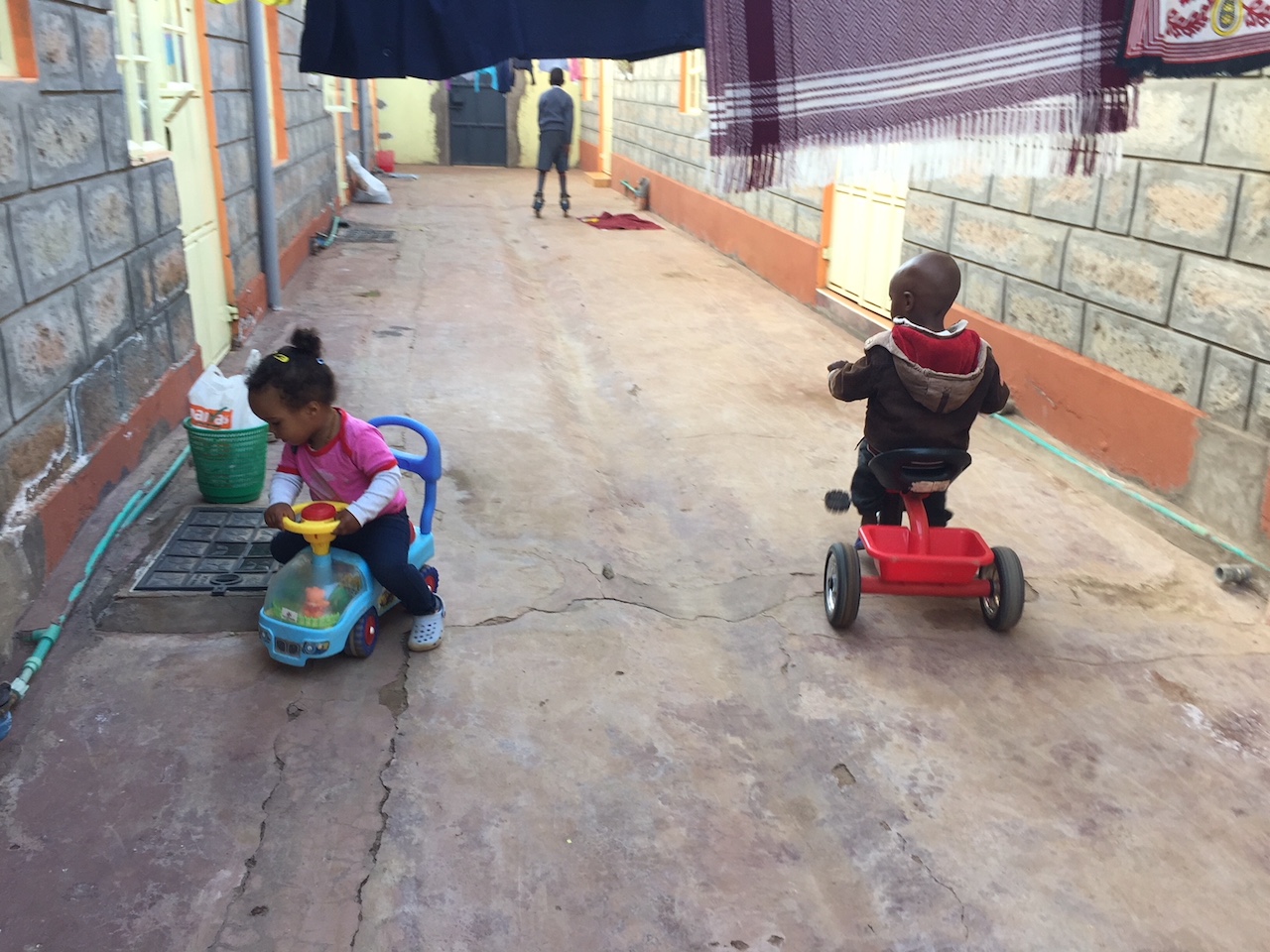 Big Wyan shows Nips how awesome he is at tricycling

But without any doubt, Nips’ favourite Wyan is “solid Wyan.” And if you ever tried to pick up solid Wyan, you would know why we gave him this name. He looks about the same size as Nips, no lightweight herself, but when you try to lift him, it’s like his bones are made of lead. So yes, solid Wyan.

Nips and the Wyans have a truly fabulous life – driving their “broom brooms,” going for walks, fighting over apples. Learning how to ride tricycles or jump or count. They greet each other in English or kiSwahili – with Nips preferring to use the more emphatic kiSwahili “Kuja!” rather than “Come!” in English. They race each other in sprints, and the afternoons are filled with delighted toddler shrieks. 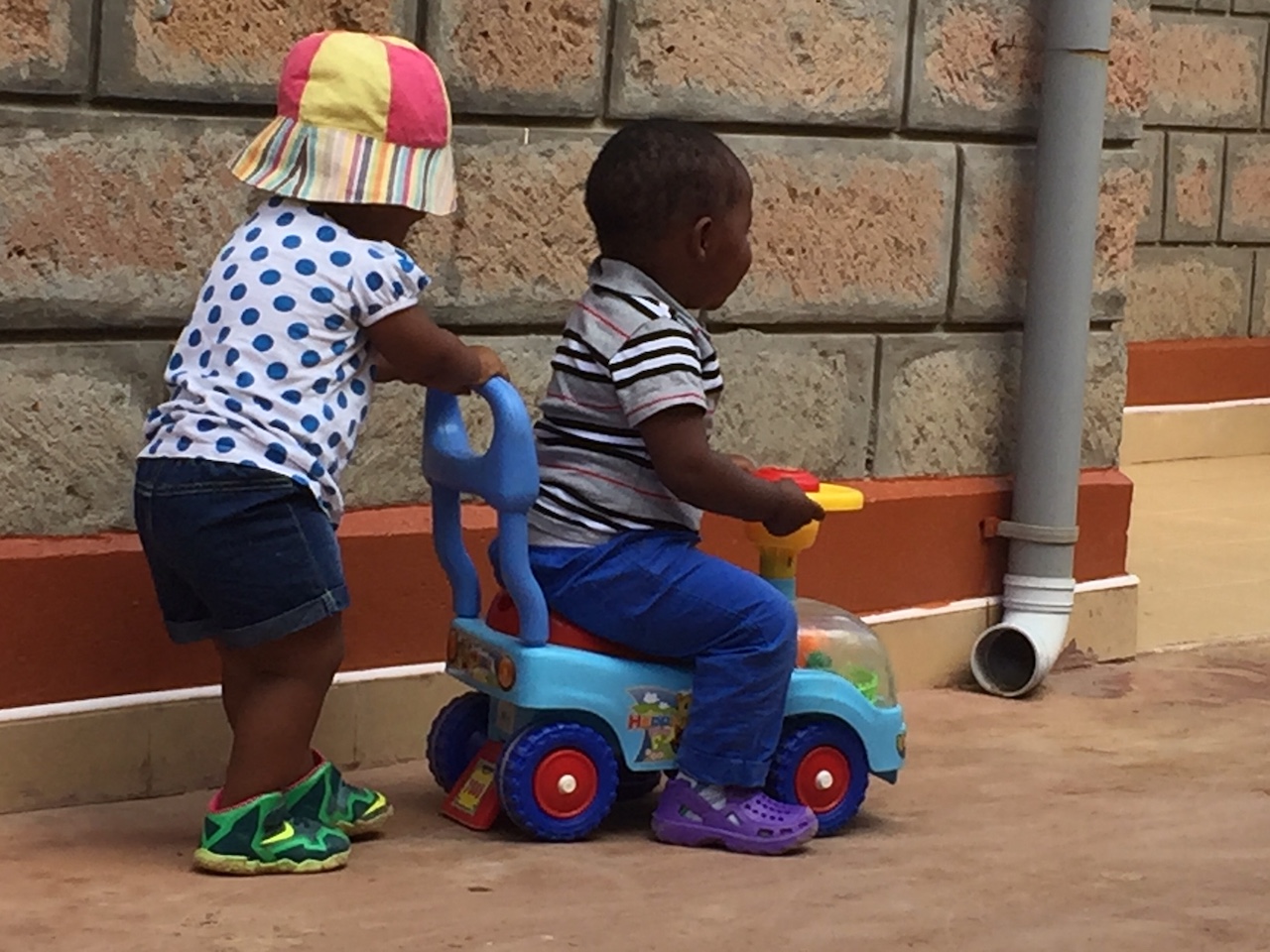 Not long after we’d settled into life in Kenya, we had to head back to the USA for a few weeks. Waiting at Jomo Kenyatta International Airport, Nips pointed to a small girl who was probably around 4 years old and at the top of her voice said, “Wyan!”

Fungai and I exchanged furtive looks. Embarrassed parent laughter. We quickly removed Nips and made our way to another waiting area.

Gosh! Do you think she really thinks that girl looks like Ryan? Which Ryan? How could she confuse her with one of them? I mean, she’s obviously a girl! And quite a bit older than any of the Ryans.

And then it dawned on us: Oh my goodness… she thinks all children are called Ryan!

Sure enough, as we traveled around New Jersey, New York, back to Boston, a stopover in DC, the trip was filled with introductions to friends’ children; none of whom were actually called Wyan. 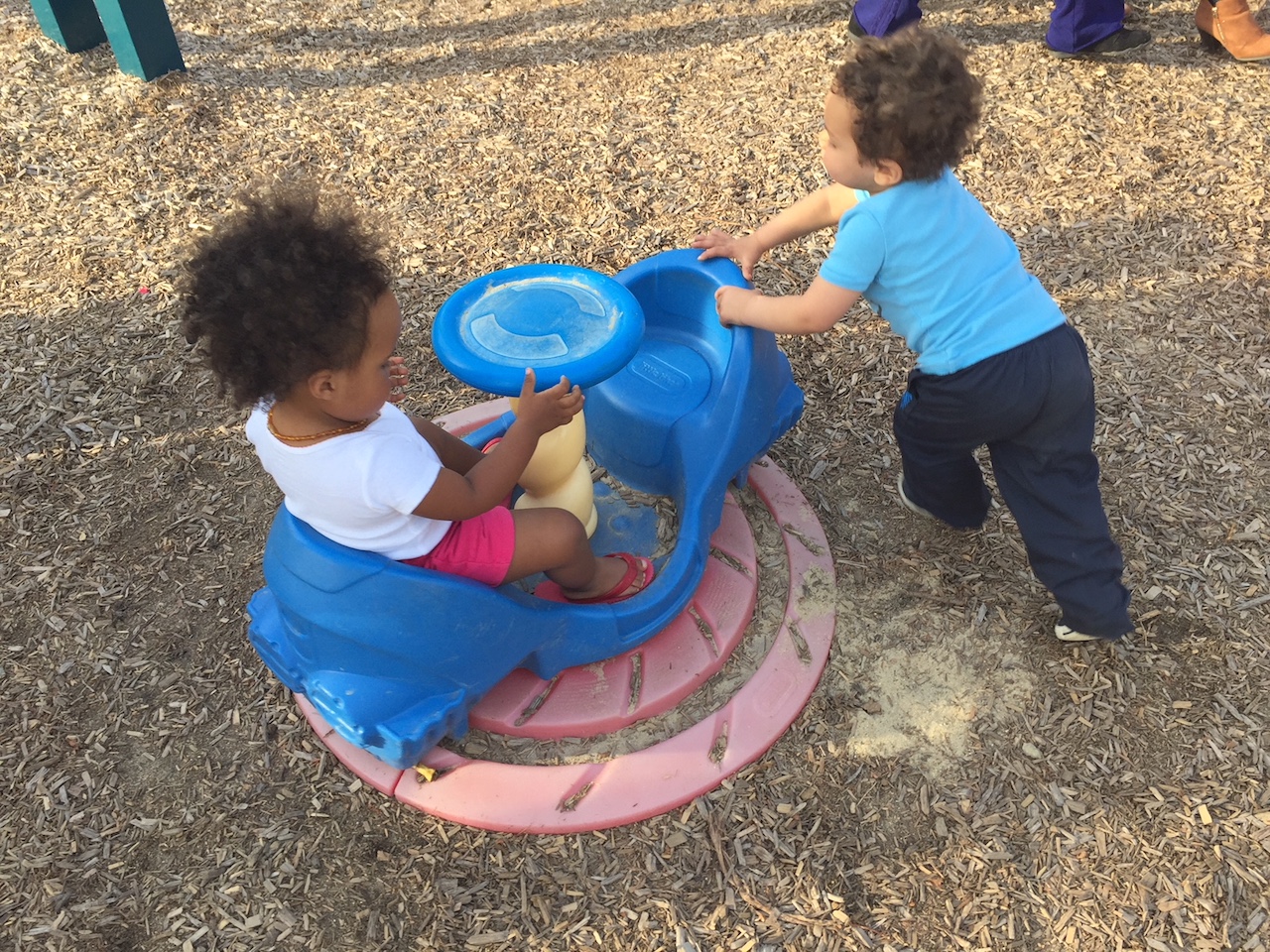 Nips and Max – not Wyan

And so on, and so forth.

And inevitably we would go through this now familiar dance of explaining that “No no, she doesn’t understand that girls aren’t called Ryan, it’s just we have three different neighbours in Kenya who all have kids called Ryan.” “No, your child looks nothing like any of the Ryans. She just, yea, thinks all kids are called Ryan!” “I know right, crazy?!”

This in turn would lead to quizzical looks and “Oh, is Ryan a common name in Kenya?” Or “Uh… did the families call their children after each other? But why would they do that?”

As the resident ‘Kenyan experts,’ we would assure friends that no, Ryan most definitely is not a common Kenyan name. And as far as we knew, none of the families knew each other previously or planned their kids’ names that way.

It was just by some freak chance or set of happy coincidences that we found ourselves in a bright sunflower yellow home in a neighbourhood of Machakos, between three Kenyan families all with small boys called Wyan, Wyan, and Wyan! 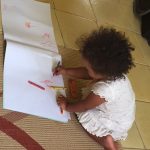 One of Nips’ favourite pasttimes – drawing! 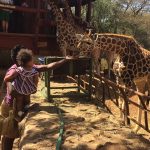 Giraffe – another perk to living in Kenya. 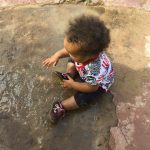 Every childhood should involve some puddles. 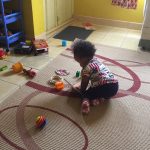