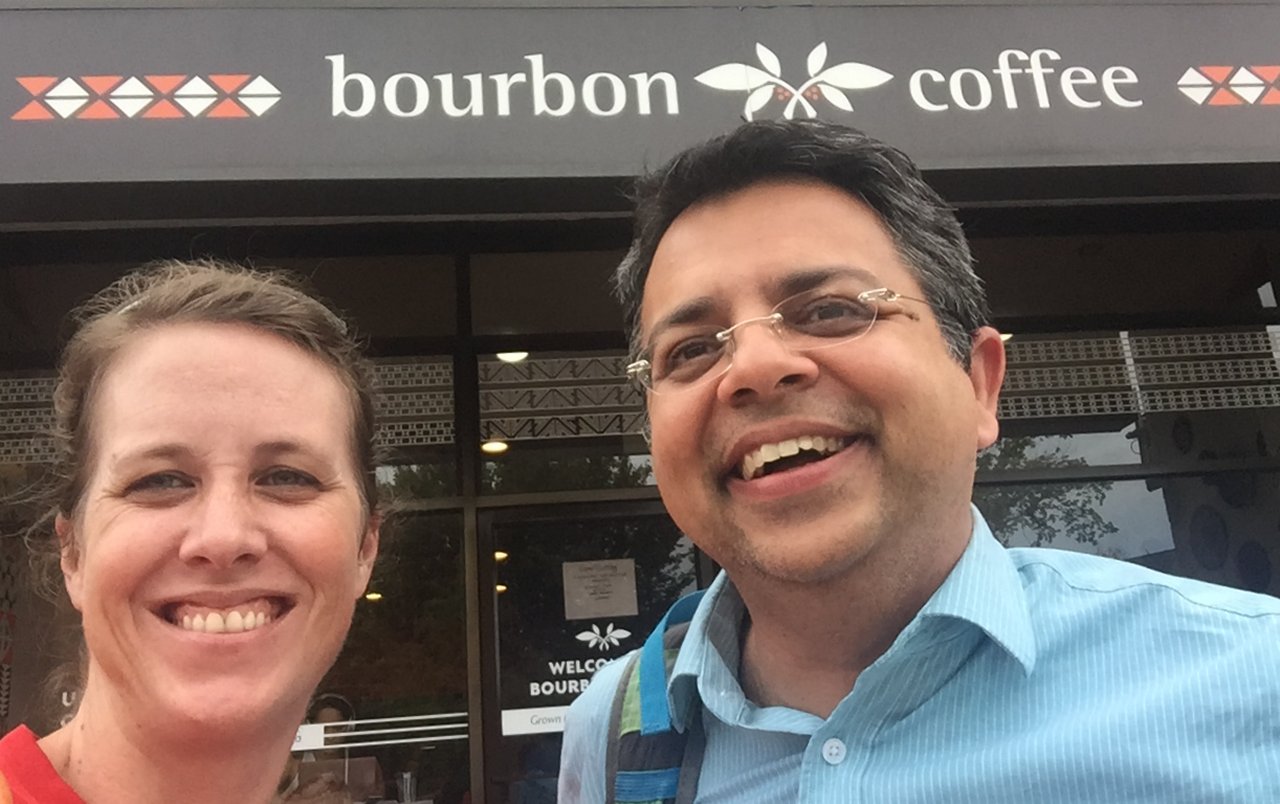 African coffee is following me in America

One thing that’s consistent as I travel around the world is my need for a strong cup of really good coffee – before 9am. Some (like Fungai!) have called me a “coffee snob.” Perhaps. All I know is that I love it and I am a better person when I have it.

For three and a half weeks, I’m travelling for work in Washington D.C., New York City, and Boston. Without my family. It’s the first time in two years that I’ve spent more than one night away from little Nips, so it’s a weird feeling. Easier in some ways; much harder in others.

What has helped me cope? Coffee!

In a strange way, coffee has also helped me feel like there’s an invisible thread between my cuppa Joe and my loved ones, going about their days in East Africa.

While in DC, I reconnected with a dear fellow nomadic friend, Gopal. He’s also a nut for good coffee and for using education to do good in the world. I’ve missed the cups of coffee and deep conversations of coffee-study-discussion sessions which we used to have while in grad school, in Amherst, MA. We’ve been scheduling and rescheduling coffee dates for about 5+ years, and last week it finally happened.

Gopal picked Bourbon Coffee, a Rwandan coffee chain, in Tenleytown, Washington D.C. Across the road was a Nando’s chicken – a reminder of two other places I call home, South Africa and Zimbabwe.

Nandos was started in South Africa, in 1987 and now operates about 1,000 outlets in 30 different countries! They flame grill their chicken, making it a healthier option than the fried chicken takeout that’s taken over the world and is fast gaining ground in Africa.

I first indulged in Bourbon Coffee while Fungai and I were living in the Boston area for his Nieman Fellowship year in 2015-2016. Then, I was thrilled to find an African coffee shop, with its musical and visual and drinkable reminders of a part of the world I loved.

But at that time, East Africa was not home. Now it is, so meeting up with Gopal at Bourbon meant even more: we were surrounded by the tastes and smells of home. It made sense to catch up there.

Sometimes that invisible thread between where you are and where your heart is becomes more tangible. The spiritual becomes visible. While Gopal and I caught up on years of adventures, I was stopped in my tracks as I heard the all too familiar strains of “Nguva Yekufara” by my dear (and deceased) friend, Chiwoniso, mbira maestro and songstress superstar from Zimbabwe; Fungai’s favourite song by Chi, and one we’ve danced to many many times!

We listened; my eyes teared up as I remembered all the times we had shared and how Chiwoniso left us far too early; how we performed nearby in DC back in 2011; how we would dream together of a better, happier world where music joined our souls. During such a deep conversation about the seemingly unresolvable problems of the world, this was a great reminder – in Chi’s words “Let me be happy. It’s the time. Let me dance, this is my time… Let it be, the time of happiness.” Thanks for continuing to look out for us, Chi. And for making that invisible thread more visible.

A few days later, I found myself at a coffee chain I’d never visited before, Bean&Bean, right in the heart of Wall Street, following a meeting with some potential funders for the education program I run in Machakos. Again, feeling uplifted by connecting with good people doing good work, I pop in to get a tasty caffeine lift, and realize they’re serving Ethiopian Yirgacheffe, Tanzanian Peaberry, and Kenya Kia-Ora Estate coffee.

“Yup, I know how to spell it. I live next door to Tanzania!” (not a humble brag, just my reality)

“Oh really? What’s it like there? I’ve never travelled outside the United States.”

He looks like he’s in his mid-twenties. Perhaps a bit of a hippie. Serving “pour over” East African coffee in lower Manhattan.

He’s also a reminder of how very very lucky I am to not only know the taste of Kenyan or Tanzanian coffee. But to actually know Kenyans and Tanzanians. And their beautiful countries. And to be able to call a small patch of space there, home.

My all-time favourite coffee shop is Peets Coffee. When we lived in Cambridge, MA, it was my go-to for numerous coffee meetings and for time to myself. The Harvard Square Peets Coffee outlet holds many memories. Then at the end of 2015, they opened up another Harvard Square café in the new Capital One bank at 24 John F. Kennedy St. Two for the price of one bus ticket ;-).

We recently discovered that Peets has an amazing African coffee blend called Uzuri (meaning ‘beautiful’ in Swahili). They brought together 6,000 small-scale farmers in Kenya, Tanzania and Rwanda to create the blend in 2010. It’s a sustainable brand and the reports we’ve read say that Peets supports the farmers with business and coffee production training.

A few short days later I met up with another dear friend, Mila, who used to be a student of mine in Zimbabwe and is now a law student in Boston. She’s also been a stand-in auntie for Nips over the years and babysat for us a number of times while we were in Boston. Again, I was reminded of that intangible, yet tangible thread – or taste – that somehow ties us all together, and was deeply inspired to see this brilliant young woman’s life heading in such a positive direction.